The Venetian baroque composer Baldassare Galuppi wrote, just as his 30 year older  colleague Vivaldi, surprising music, but in a much more galant style. Galuppi’s definition of good music (beauty, clarity and good modulations) is certainly recognisable in his own concerti in which he can be found on the border between baroque and classical. 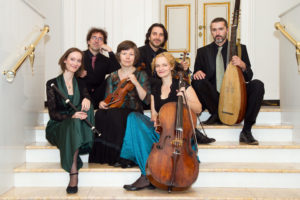 The in Prague based Collegium Marianum plays concertos by Galuppi alongside concertos by Vivaldi and Frantisek Jiránek. Jiránek studied in Venice and was obviously inspired by Vivaldi.

In the Fabulous Fringeconcert ‘Venetian Housemusic’ Duo Serenissima concentrates on the ‘housemusic’ composed and published in Venice in the first half of the 17th century. It comprises complex, but enormously popular Italian monodic songs and relatively simple ‘Alfabetto’ strophic guitar songs. The programme will bring to light the intimate vocal music which was created alongside the large scale works by Monteverdi, Gabrieli and the birth of opera in Venice.
Duo Serenissima comprises the Canadian singer Elisabeth Hetherington and the Dutch luteplayer David Mackor.

Duo Serenissima will also be playing during the 2017 Utrecht Early Music Festival, but then in the main programme! On Monday 28th August at 11.00 the duo will be playing religious French ‘airs de cours’.

Here is the playlist in the progamme guide.