This week in Acoustic Roots, a special broadcast of a concert by singer Linde Nijland and multi-instrumentalist Bert Ridderbos, that we recorded in late 2014. They performed as artists in residence at the concert series GUO (Groeten uit Oisterwijk) in Oisterwijk.

Inspired by their journey by car from Groningen to Bhutan, they compiled a full night’s worth of music. 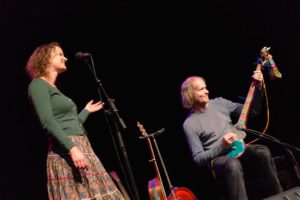 For years, Linde Nijland was one half of the famous sing-duo Ygdrassil, until the group ended in 2007. Ever since, she has been performing solo, usually accompanied by string virtuoso Bert Ridderbos (o.a. on cittern: a ten-stringed medieval instrument, as well as guitar, banjo and accordeon). She regularly tours countries like England and Germany, besides her performances in the Netherlands.

Her journey together with Bert was a unique project. In 2008, they traveled from the Netherlands to Bhutan by Land Rover.  During the trip, Linde played with traditional musicians in Serbia, Iran, Pakistan, India and Bhutan. In Bhutan, she performed at the concert honoring the fifth king. in 2011, the DVD (+CD) “A Musical Journey” was released, with spectacular moving images and subtle but revolutionary combinations of folk- and world music.

She received international renown for her project on the English folk singer Sandy Denny. Joe Boyd (producer of Nick Drake, Fairport Convention and Pink Floyd) said of her record ‘Linde Nijland sings Sandy Denny’ from 2003: Linde Nijland has given Sandy Denny’s music the respect it deserves, and made a lovely and fresh record that shows off her beautiful voice as well as her good taste’. In 2009, she was invited to perform at a one-off reunion concert of Fairport Convention in the Barbivan Hall in London, with Richard Thompston amonst others. 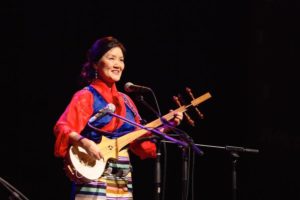 Is also called ‘The Tibetan Nightingale’, and sings both folk music from her motherland Tibet and classical Tibetan opera. She accompanies herself on the dranyen, the Tibetan lute. 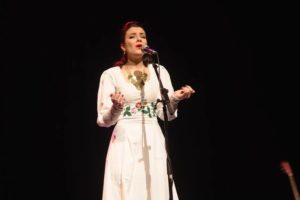 At time of recording, singer Danica Krstic was a 12-year old child star. Not long after the recordings, she became succesful with her own ensemble, and in 2015, she even made it to the preliminary rounds of the Eurovisie Songfestival. However, she prefers folk music, and performs in authentic dress. 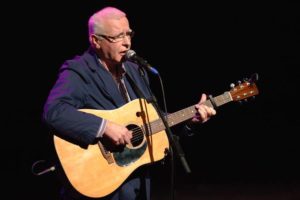 Performed in 1974 in the Dutch folk rock band Fungus, which played Pinkpop, toured internationally, and played in the Amazing Stroopwafels. He plays Dutch and English classics, some from his Fungus-era.

In the next Acoustic Roots, the Göksel Yilmaz Ensemble will play. This episode was recorded on the first of september 2016, at 20:15 in the Kargadoor, Oudegracht 32 Utrecht.

You are invited to attended the taping of future episodes!

13.  Mantra Of Purification, Love And Compassion