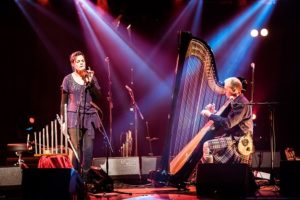 Musiques D’Ecosse, Joanne McIver & Christophe Saunière.
Joanne McIver grew up in south west Scotland, on the Isle of Arran. She composes, plays the bagpipes and Irish flutes. Her voice beautifully interprets the music of her isle. Christophe Saunière is a virtuoso harpist player and played in major French and European symphony orchestras. The clear and expressive songs filled with Gaelic poetry resonate as if they where carried by the wind: the flutes and bagpipes seem to have been awoken from sleeping  menhirs, that “seem giant guards of an enchanted land”. The harp with contemporary accents, takes us along in the symbolism of Celtic people. Ever since the days of the ‘Clearances’ – the forced emigration of the Highlanders in the 18th century – popular Scottish music has contributed to the development of Scotland’s identity. The land has its own language, instruments, heros, phrasing and vocabulary. The repertoire has an wide array of dancing music like the jig, reel, and stratshpeyen, and the refined ‘pibroch’ music. The play of Joanne McIver (bagpipes, flutes and vocals) and Christophe Saunière (harp), might make you dance.
CD. Musiques D’Ecosse, Joanne McIver & Christophe Saunière (cd.1+2).
Label: Buda Records (2016), code: 4763129.
Distribution: Xango Music.
Video