On Sunday 18 September, the first episode of this season was recorded at VondelCS in Amsterdam. And what an episode it was. At the age of 83, singer Thérèse Steinmetz is back on stage and she pays us a visit

! Edison winner Philippe Elan, ambassador of the Chanson in the Netherlands convinced the retired dive to make a comeback. In this special broadcast of The Sound Café, the singing duo talks about the magic of their collaboration and of course they perform live, together with pianist Nico van der Linden.
On top of that, the first copy of their brand new album ‘Amsterdam-Paris’ – released by Harmonia Mundi/Pias – is presented to cabaret performer and programmemaker Jacques Klöters. 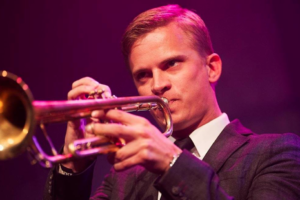 Jazz trumpet player Teus Nobel is also our guest. You know, the trumpet player who played the traditional last post on 4 May. Teus plays work of his album ‘Social Music’. The amazing album is best described as dirty electronic jazz. It oozes the influences of Flying Lotus, Moondag and the Bitches Brew period of trumpet legend Miles Davis.

Louis Gauthier is during the entire broadcast accompanied by a sidekick who feels right at home in both French and jazz music: Dafne Holtland, member of the female pop folk group Zazi.