The performance of Mokoomba, a young band from Zimbabwe, recorded at the  Lantaren/Venster in Rotterdam on 17 February 2017.

Mokoomba comes from Victoria Falls, Zimbabwe. They play South African and Tonga rhythms and in their music the influences of Afro-beat, soul, soukous and Congolese rumba can be heard. The six use both traditional and contemporary instruments and can silently sing a capella or throw a soukous dans spectacle on stage. 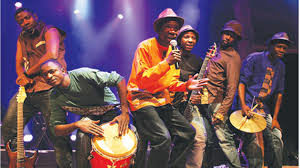