Special guest: Oscar Harris. Music from Suriname, Caribbean and South America. A program based on an idea by Noraly Beyer, around ‘Special Guests’ who are allowed to determine their theme and the music themselves. 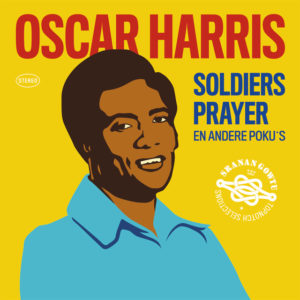 For over half a century, crooner, entertainer and ‘mister Soul’ Oscar Harris has been on stage. He performed with a selection of large, international stars, conquered different parts of the world with his songs and made an unimaginable amount of singles, albums and CDs. His career started in 1960, on a Sunday afternoon in Paramaribo.

In 1973, Harris left The Twinkle Stars. In fact, he felt more ‘crooner’ than band member, although he remained in solidarity with the group on tour in the US. There Arthur Miller, known as writer, ex-husband of Marilyn Monroe and concert organizer, tried to persuade him to sign a recording contract. His voice and performance were, according to Miller, absolutely at home in the American showbiz. Flattering, no more, but Harris refused to let his band down. They had come as a collective and that was how they would fly back. Eventually he went solo, because he wanted to explore other genres. The public had to get used to that, but in 1980 it was also a hit with the enormous hit Song for the children that also brought him international fame. Harris went on tour through Israel, Indonesia and Africa.

After that Harris regularly performed with the Metropole Orchestra and explored practically every imaginable genre. Recently he made his appearance in various TV programs. To this day, he is a popular artist. Because of his voice, his versatility – the last few years he is looking for a jazzy and bluesy repertoire – and his engaging performance. What songs he sings is for him. As long as he lets the room enjoy: ‘Entertaining is my business.’