With music by Sainkho Namtchylak (Siberia) and the Sino-American cellist Yo-Yo Ma. 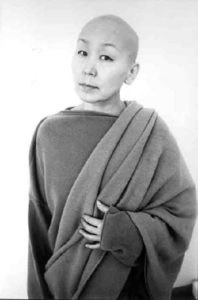 1-
With her shaved head and range of seven octaves, Sainkho Namtchylak would stand out on every stage. Add her specific mix of Tuvan throat singing and avant-garde improvisation and she will become an unforgettable figure. She moved from Tuva (Siberia) to Moscow, where her surprising vocal gifts were recognized and featured internationally in the “showcase” ensembles of the USSR. She then went on to Western Europe, where she became a phenomenon of creative improvised music and was part of the emergence of the contemporary world music scene. A performance at the WOMEX festival in Berlin brought her to the attention of many and in 2001 an American tour was planned.
Cd. Time out: Seven songs for Tuva by Sainkho Namtchylak.Label: Ponderosa (2010), code: CD 004. | Muziekweb: KBX1258 tracks 1 to 7 | VIDEO 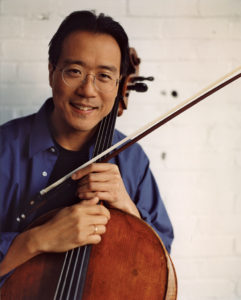 2-
The famous Sino-American cellist Yo-Yo Ma likes to bring together different musical worlds. That is why he created the “Silk Road Project” in 1998 to study the music of the areas through which the Silk Road ran, the age-old trade route that connects Europe and Asia.
The ‘Silk Road Ensemble’ consists of young musicians of different nationalities who play on traditional Eastern and Western instruments, ranging from the Arabic flute (ney), the Chinese lute (pipa) and the Iranian zither (santour) to the western violin, cello and trombone.
Cd. Silk road journeys/When strangers meet by Yo-Yo Ma.
Label: Sony (2002), code: SK 89782. | Muziekweb KJX2046 tracks 9 and 10 | VIDEO