In today’s episode of Disc-Cover, we pay attention to a Scottish band again. The band Wolfstone, not to be confused with the Irish band Wolftones, still exists. However, the band hasn’t released a completely new album since Terra Firma in 2007. In 1989, a collaboration between fiddler Duncun Chisholm and singer-guitarist Stuart Eaglesham resulted in a new Scottish folk rock band and together with a second guitarist, drummer and bass player, they recorded two albums that were simply called Wolfstone I and II. Two albums the band doesn’t like to be reminded of. These albums are not worthy of the name Wolfstone anymore, so they say.

Another rhythm section and singer-guitarist Ivan Drever from the Orkneys, in particular, gave Wolfstone its characteristic folk rock sound. Ivan Drever is, by the way, the father of singer-guitarist Kris Drever of the LAU trio, who played a leading role in the previous episode of Disc-Cover.

The album The half tail is considered Wolfstone’s masterpiece. It contains familiar elements like beautiful ballads, fort he most part composed and sung by Ivan Drever with his characteristic, somewhat whining voice. Those songs are alternated with solid folk rock instrumentals, to which keyboards and bagpipes are added. Thanks to a license agreement, the American Green Linnet label released Wolfstone’s albums. It means that the band is also making a name for itself in the US. Financial mismanagement – not the musicians but their management ran off with the money – almost led to their end.

Drever recorded some other projects on the side and decided to permanently leave the band in 1997. In the meantime, some other members had also left already. The core members Chisholm and Eaglesham formed a new band and have recorded three more albums. Allthough their live performance is still something to enjoy, the band no longer reaches the level of their album The half tail, either musically or creatively. 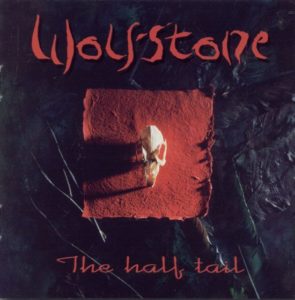