1-
The American bluesman Paul Pena and the master of the Tuvian throat song Kongar-ol Ondar († 2013).
While listening to the radio, Paul Pena heard a broadcast of throat singing, the Tuvan art of manipulating harmonics while singing to better distinguish higher frequencies, making it possible to sing two notes at once. Paul Pena was enchanted and taught himself to sing throat. One day he attended a throat singing concert and, after the concert, impressed one of the throat singers, Kongar-ol Ondar, who invited him to visit Tuva, a republic of the Russian Federation (formerly the People’s Republic of Tannu Tuva ) And home to the throat singing, to sing in the triennial throat festival held there.
CD. Deep in the heart of Tuva. | Label: Ellipsis Arts (1996), code: CD 4080. | VIDEO-1 | VIDEO-2 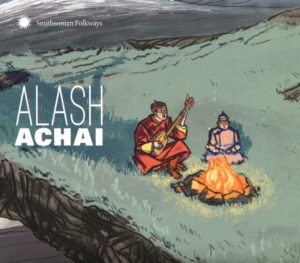 2-
Ensemble Alash.
Achai, the Tuvan word for father, describes a deep paternal participation in the education and growth of a new generation. It is also the title of Alash’s new album in honor of Kongar-ol Ondar, who served not only as the musical father for the ensemble, but also for an entire generation of Tuvan musicians. As Ondar shared memories and traditions, Alash does that with tough performances and progressive collaborations. In the ensemble’s first studio album for the Smithsonian Folkways label, the album Achai beautifully illustrates the adaptability of Tuvan music – organically made and deeply rooted, but still connected to the sound world of the 21st century. Featuring master beatboxer Shodekeh, alongside time-honored Tuvan throat singing styles, the album shows how members of Alash have dedicated their lives to performing, preserving, developing and growing the Tuvan tradition.
CD. Achai – Ensemble Alash. | Label: Smithsonian Folkways Recordings(2017), code: SFW 40578. | VIDEO