Concerts from around the country, recorded by Concertzender (World Music).

The Omar Bashir Ensemble gave a concert during November Music in the Willem Twee Concert hall in ‘s-Hertogenbosch on 9 November 2018.
Omar Bashir was born in Hungary in 1970. He is from a music dynasty of ud musicians. His father was the well-known ud master Munir Bashir and his uncle Jamil Bashir was just as famous as an ud master. When he was 5 years old, Omar left Hungary with his parents to Iraq where he grew up and where his ud training started. Munir Bashir (1930-1997) shifted the beacons within Arabic music by putting the ud forward as a sparkling solo instrument. His son Omar Bashir (1970) walks in his footsteps and knows like no other to keep the silent poetry of the ud alive. 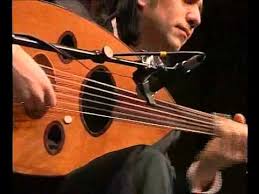