Talents are passed on
In this episode, guest producer Jos Bielders intends to extensively shed light on the musical sons of the great master. Johann Sebastian Bach had a large family, among them a few very talented sons who later also were to be composers. We present Johann Christian, Carl Phillipp Emanuel and Wilhelm Friedemann.

Johann Christian was the last child of Johann Sebastian Bach and Anna Magdalena. He was taught by his father, and after his death in 1750, by his 21-years-older brother Carl Philipp Emanuel, with whom he lived together in Berlin from 1750 on. From 1754 to 1762 Johann Christian lived in Italy, where he was converted to Catholicism. In 1762, he settled in London, the centre of opera at that time. In the following years he came to be one of the most important musicians of the English capital city. On the banks of the river Thames people listened to his concerts. And in 1765 the eight-year-old Mozart became friends with Johann Christian.
Characteristic for Bach’s way of composing were the lyrical melodics with a clear Italian streak. Johann Christian Bach composed a lot of worldly music, unlike his above mentioned brothers, who were more attracted to religious music. 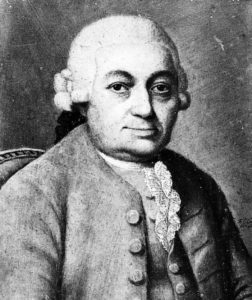 Carl Philipp Emanuel Bach was the second son. In his time he was an important musician and composer. By some people he was even more appreciated than his father! His way of composing presents us with music from the Baroque as well as music from the beginning of the Classical period, with even touches of Romanticism.
His basic training he got at St. Thomas School in Leipzig, where he was taught by his father. In addition to that, he studied law. When Peter the Great came to the throne, Carl Philipp Emanuel was appointed Kapellmeister at het Berlin court. After discharge, he succeeded Telemann as musical director in Hamburg.
Carl Philipp Emanuel Bach is said to be the first romanticist. The fact that he slowly let go of basso continuo shows that he already had one foot in Classicism. 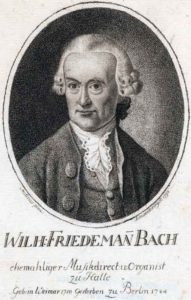 Wilhelm Friedemann was the eldest son. He was a student at St. Thomas School in Leipzig, where his father was a teacher. He was a gifted child, and studied music and mathematics.
Friedemann was to be cantor and organ player in Dresden. By the time he moved to Berlin (in 1774), he was seen as the greatest organ player of his time. After having worked in the German town of Halle for some time, he became an independent musician.
Wilhelm Friedemann Bach is a typical transitional composer. He was greatly influenced by his father’s work, and he may be considered one of the pioneers of the Classic Period, and maybe even of Romanticism. Expression of feelings, which was very typical for compositions of his time, is an important characteristic of his style.
He composed cantatas, organ works, symphonies and clavichord concerts.
Friedemann led a wild life; to get out of financial straits he sold manuscripts of his father. He died under miserable circumstances.