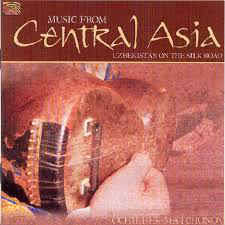 Uzbek music has two different music classes: folk music and the classical “art music” based on the maqam.
Ochilbek Matchonov was born in 1979 in the city of Khiva in the region of Khorezm, Uzbekistan. The youngest of three children, he was born blind. From childhood he was fond of music and played various national instruments. He went to a school for the blind and then to a music school specializing in Bakhchilik, the Uzbek traditional song of old legends, and the improvisation of a story while singing. Then he went to study maqam singing in the city of Urgench. In his songs he sings about love, religious topics and courage.
Cd. Music from Central Asia : Uzbekistan on the Silk Road – Ochilbek Matchonov.
Label: Arc Music (2005), code: EUCD 1946 | VIDEO