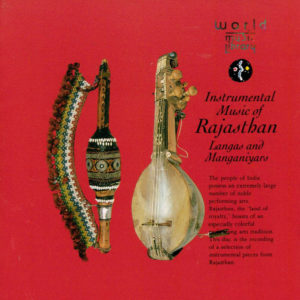 nstrumental music of Rajasthan, performed by one of the two hereditary classes of musicians of Hindu society. Traditionally, they performed their music in front of patrons of either Islamic or Hindu belief, be it the Rajput princes or Brahmins. The musical themes can be sacred or profane, religious or secular. Their instrumental music includes folk or regional versions of the sarangi and shehnai. Musically, their repertoire of songs and melodies is very interesting for its contribution to the debate about the origins of classical ragas, as much of their repertoire is embedded in ragas.
CD. Instrumental music of Rajasthan – Langas & Manganiyars.
Label: Nandi (1992), code: KICC 5118.