Episode: Music as it might have sounded in ancient Greece. In this episode we will be listening to constructions and reconstructions by the Ensemble Melpomen conducted by Conrad Steinmann. 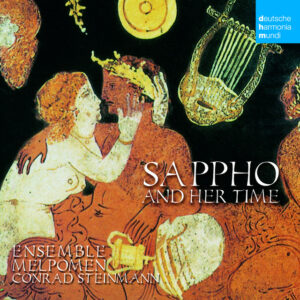 Ancient Greeks have played an important part in the development of music. The word “music” is derived from the Greek “μouσíkƞ” (“musike”), which contains the word muse: the art of the muses.

Sadly there are no written records of ancient Greek music left to us today. A large amount of literature regarding music theory has been preserved, however. This music theory has influenced music into the middle ages.

This ensemble also made a CD focussing on poetry by poet and singer Sappho (6th century BC) as well as her contemporaries.