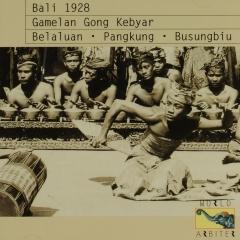 World Arbiter presents historical gamelan recordings made in 1928 as part of a collection of the first and only commercially released recordings of music made in Bali before World War II, the first ever to document pre-war genres. The compositions heard on part 1 are non-traditional, avant-garde experiments that later evolved into familiar forms, new music recorded close to the beginning.
After five years of research and fieldwork, Edward Herbst provides analytical notes and a glossary along with 1930s silent films shot in Bali by Rolf de Maré. On the website of Arbiter of Cultural Traditions you can read and see a lot about this Balinese music.
Cd. Bali 1928 ; vol.1 : gamelan gong kebyar. Label: World Arbiter 2011.