Tibetan singer Namgyal Lhamo will be guest in our ‘living room studio’ on the 19th floor of the Conclusion building in Utrecht.


Namgyal Lhamo is one of the best-known singers of the traditional Tibetan song and opera. Because she started at the early age of eight many people considered Namgyal Lhamo to be a child prodigy. During fourteen years she qualified herself in every aspect of the Tibetan performing arts. She was taught by great masters of Tibetan opera and classical music at the Tibetan Institute for Performing Arts (TIPA). Lhamo grew out to be thé star of Tibetan song and opera in TIPA. Because of her education she stands in the tradition of the different kinds of classical and folk music of her country. Her interpretation of the ‘Nangma’ and the ‘Toeshe’, Tibetan classical music from the 17th century, is generally commended. Therefore she is known as ‘the nightingale of Tibet’ 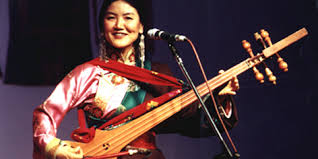 Mission
Namgyal Lhamo has been living in the Netherlands since the 80’s. All this time she worked on her mission to preserve the Tibetan culture through her music and singing. She took part in different cultural manifestations in the Netherlands and abroad, like Earth Dance, World Artists for Tibet, the 50th anniversary of the Universal Declaration of Human Rights and performed during the Tibetan Freedom Concerts in Amsterdam and New York. Namgyal Lhamo performs solo. She accompanies herself on stage with the Tibetan lute (dranyen).
For more info: www.namgyallhamo.com
or www.facebook.com/namgyallhamo