Folk singer / singer songwriter Linde Nijland is a guest in the live programme Acoustic Roots, along with multi-instrumentalist Bert Ridderbos.

Linde Nijland is the most prominent Dutch folk singer. She has a crystal clear voice and performs songs in the style of English, Irish and American folk music. Linde started her career at a young age, as half of the singing duo Ygdrassil with which she performed for 15 years and made five albums. 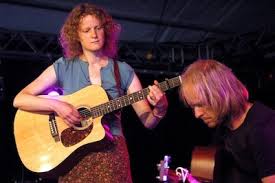 Since 2007 she’s performing solo, accompanied by multi-instrumentalist Bert Ridderbos, sometimes in combination with other artists (such as Iain Matthews, Fred Piek). With a successful tribute to British singer Sandy Denny (Linde Nijland sings Sandy Denny), she caught the attention of American producer Joe Boyd, who asked her to sing at a reunion concert of the legendary Fairport Convention group at the Barbican Hall in London in 2009.
In recent years, Linde appeared in the Dutch news with a special trip across land to the Himalaya kingdom of Bhutan, of which the CD with DVD ‘A musical journey’ was released in 2010. During her trip Linde gave concerts and she performed with traditional musicians in countries as Serbia, Iran, India and Bhutan.
– Preview of new album –
Linde’s new, tenth album will be released in early March. She made it together with Bert Ridderbos (on guitar, banjo, cittern, bass, mandoline and accordion) and guest musicians. The ‘I am here’ album contains many self-made songs, as well as covers and a traditional. In Acoustic Roots, Linde shall give a live preview of her new CD.