Special Guest: Jeffrey Spalburg. Music from Suriname, Caribbean and South America. A program, based on an idea by Noraly Beyer, around special guests who are allowed to determine their theme and music themselves. 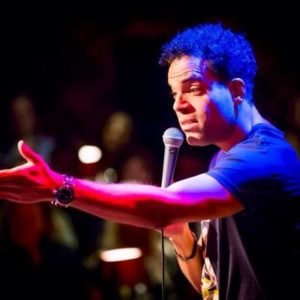 Even before his admission to the Toneelschool Utrecht, he took his first steps in the Hiphop scene as ‘Master Of Ceremony’. He worked with various rap groups and a number of bands (including the ‘Hipbone Connection’ and ‘Horn of Plenty’). Under the name ‘Brothers Of Showbizz’ he presented various festivals with comedian Najib Amhali for years.
Acting – Jeffrey started as an actor at ‘Made in da Shade’, a pioneer in the field of urban theater in the Netherlands. ‘Made in da Shade’ has been very successful, both in the Netherlands and abroad. He played a film role in the comedy ‘Gangsterboys’, where he played the role of undercover agent. In the fourth season of The ‘Dino Show’ Jeffrey Spalburg was shown in an episode of FC Kip …
Performances – Jeffrey is one of the regular writers for Jörgen Raymann’s full-length shows and television productions. For years, Jeffrey has been at the Comedy Café in Amsterdam …
His first full-length cabaret show was Brommers Kiek’n. The public and the press were unanimously enthusiastic about the story of his youth in Twente and his life now in the big city …
Music – Jeffrey released the success single Hengelo-o-o ‘of the cabaret show Thuus, and also the remix Paramaribo-oo, which Jeffrey made together with reggae-artist Kenny B. And, on the occasion of the World Cup in Brazil, brought Jeffrey the single Maracanã from …

Thanks to:
Salto Amsterdam

Repetitions:
Saturday Januari 13, at 3am 10pm