Special Guest: Vincent Henar. Music from Suriname, Caribbean and South America. A program based on an idea by Noraly Beyer, around a ‘Special Guests’ that can determine the theme and the music themselves. 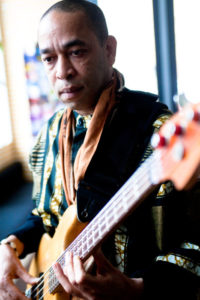 Fra Fra Sound mixes jazz, African rhythms, dance music from the Caribbean and Surinamese Kaseko and brings together a wide range of melodies, grooves and themes from different cultures in a jazz setting.

Fra Fra Big Band was established to celebrate Fra Fra Sound’s ten-year anniversary. The original line-up of the seven musicians of Fra Fra Sound is supplemented with other musicians in the Big Band. These can be special soloists with specializations such as african drum, a brass section or jazz.

Since 2011 Vincent Henar can call himself ‘Ridder in de Order van Oranje Nassau’. He received the award as a token of appreciation for how he and his band managed to give the city of Amsterdam and the multicultural society a face, for his role as ambassador for Dutch and Surinamese culture and for his commitment to (young) music talent and musical education.