Two concerts by Trio Qasyon and the Uighur Mäshräp Ensemble, recorded during the 31st edition of the Hout Festival, 19 June 2016 in Haarlemmerhout.

First the Trio Qasyon which has two sisters in it: Jawa Manla (vocals & ud) and Shaza Manla (qanun), and Moda Salameh (drums). They mostly play oriental, classical, folk and popular (for instance Um Kultum) Arabic music and music from Turkey.

Jawa Manla is one of Syria’s greatest musical talents. She toured Egypt, Lebanon, Oman and Turkey as a professional musician at a young age already. Her younger sister Shaza Manla plays the qanun. The qanun is related to the cimbalom and is sometimes called the Arabic harp.

Percussionist Modar Salameh regularly dreams about his motherland Syria, which he had to flee from four years ago. He left most of his instruments behind, because that way his departure felt less permanent. 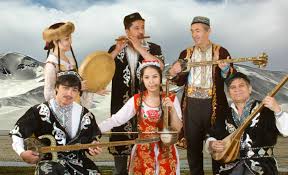 The Mäshräp Ensemble, domiciled in the Netherlands, plays and sings traditional Uighur classical music and folk music, often with ancient songs about love, friendship and homesickness. A ‘mäshräp’ is a family gathering with a lot of food, singing and poems. The Abbas family, who have lived in the Netherlands since 1989, is at the core of the Mäshräp Ensemble. They play a subtle mixture of Western, Asian and Arabic elements.