Born in Nepal in 1956, Namgyal Lhamo, also known as The Nightingale of Tibet, is regarded one of the best singers in Tibet, even though she has never lived there herself. She was taught the first Tibetan songs by her mother. Already at an early age, her special sound attracted attention and at the age of eight she was admitted to the Tibetan Institute of Performing Arts (TIPA) in India, which had been founded by the Dalai Lama. She specialized in classical songs and folk music and soon became one of the institution’s most famous opera singers. 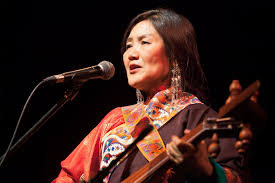 Namgyal Lhamo also plays traditional instruments such as the dranyen (Tibetan lute) and the dulcimer (a Tibetan string instrument). She made various CDs with her own compositions and, today, lives in Utrecht.

As we still have some time left, we will end this programme with a number of songs of Namgyal Llamo’s CD: Songs of Tibet, released by Music & Words in 2002.