In this episode of Disc-Cover we make a folksy trip to the Spanish Baroque with the album Luz y Norte by the British harpist and orchestra leader Andrew Lawrence King. He executes the recorded melodies of the Spanish nobleman and musician Lucas Ruiz de Ribayaz y Foncea with The Harp Consort. It was the first CD of this new formation in which diverse harps (arpa doppio, renaissance harp, Triple harp, baroque harp) are central. They were complemented with replicas of early guitars, theorbo, viola da gamba, viol and percussion. Lawrence King had already won his spurs in the classical world as a choir conductor, but also as a singer of among others The King Singers. During his study in London he discovered the harp and because of the lack of proper teachers he learned himself how to play by studying historical writings. Luz y Norte was the beginning of a succesful period in which Lawrence King brought down barriers between early, classical, folk and popular music. In addition, he continued to produce albums under his own name, be it with guest musicians, where he sometimes connected closely to the accepted classical methodology, but then sought for the controversy and put his own mark on customary patterns, agreements and theories. An album by Lawrence King is, first and foremost by his virtuous control of his instrument, never dull. Luz y Norte opened the ball with remarkable albums where folk, folksy, classical and early music form an amalgam. 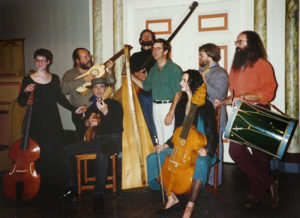