An Ox on the Roof

Today you can listen to the 11th episode An Ox on the Roof hosted by Thea Derks. This programme is loosely based on her book An Ox on the Roof: an introduction to contemporary music composed after 1900 explained in ordinary language.

In episode 10 we listened to some composers that were considered ‘Entartet’ by the Nazi’s. Today we’ll open a new page in the history that is modern music.

Béla Bartók developed the ‘snapped pizzicato’, which is a sound effect made by a string player where he plucks the string away from the fingerboard with the right hand with sufficient force to cause it to snap back. This astonishing feat of musical technique is now known as the ‘Bartók-pizzicato’.

In addition to new playing methods, new instruments were also developed. For example the theremin, named after the Russian Lev Sergejevitsj Termen, better known under his later name Leon Theremin. In 1919 he mounted two antennas onto an electronic body with which the player does not make physical contact. With one arm he / she displays the pitch and with the other the volume. When the player slightly shakes his hand it causes vibrato.

Although Theremin developed this electronic instrument in 1919, its 100th anniversary was celebrated in 2020. Famous theremin players were Clara Rockmore and Lucie Bigelow Rosen, apart from the inventor himself. After a short popular period, the instrument fell into disuse, but in recent decades it has been on the rise again, thanks in part to musicians such as Lydia Kavina and Thorwald Jørgensen.

Tip: if you buy the book at boekenbestellen.nl,you’ll receive a copy with a personal assignment. 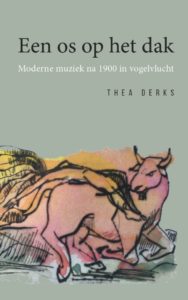