An Ox on the Roof | Concertzender.nl :: Radio

An Ox on the Roof

An Ox on the Roof 45: The Ox in times of war.
An introduction to contemporary music in ordinary language.

Meanwhile, the Russians have succeeded in destroying much of Ukraine’s infrastructure, forcing residents to go into winter without gas, light and water. This is unfeasible; of course, a human being cannot live without heat and moisture.

So essentially, Putin is committing genocide against Ukrainians, as Stalin did before him in the 1930s. Back then, the dictator drove millions to their deaths during the famine known as the Holomodor. Yet the West still does not intervene.

Although they seem to be fighting a losing battle, the Ukrainians are not giving up; they fight their attackers with admirable heroism. That is why this episode once again features plenty of Ukrainian music.

Also, today, we start with work by Maxim Shalygin, who, although living in the Netherlands for many years, still feels firmly committed to his homeland. His digital album Six Bagatelles & Suite-Homage to Alfred Schnittke was recently released.

The recordings were made over the years in Kyiv with Ukrainian musicians who still live and work in the capital. ‘Despite bombings by drones and missiles and risking their lives, they continue to fight on the cultural front of their homeland,’ Shalygin writes in his commentary. He asks us to support Ukrainian musicians through the Kyiv Contemporary Music Days site.

His colleague Svitlana Azarova came to the Netherlands earlier, where she studied composition with Theo Loevendie. Her symphony Pure Thoughts Transfixed for a large orchestra, which she composed in 2010 for the Eastern Connecticut Symphony Orchestra, will be heard today.

Four years later, Russian-leaning president Viktor Yanukovych was ousted during the month-long Maidan Revolution, named after the square of the same name in Kyiv. That same year, Valentin Silvestrov composed his four-part choral cycle Maidan 2014, each movement of which opens with a variation on the Ukrainian national anthem.

After Russia’s invasion last February, Silvestrov fled to Germany, where he celebrated his 85th birthday on 30 September. German label ECM released a CD of the Maidancy cycle and other choral works to mark the occasion. 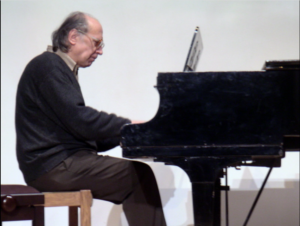 The 1st edition of An Ox on the Roof is sold out, but you can receive a copy of the 2nd edition via bookorder.co.uk.