He was born on 23 December 1923 in Bandoeng, went later to Batavia (now known as Jakarta) and developed into one of the best, if not the best Hawaiian quitar player of the world. This happened under influence of the radio shows from America which were received well in Indonesia and in which the most famous pioneers of the Hawaiian guitar and Hawaiian music in general had their weakly programmes. This were Hawaiian people like Sol Hoopi’i, Andy Iona, David Keli’i and many more who could win over the American people with their miraculous instrument. And that for a long period. A lot of Indonesians were moved by this beautiful music and that led to several known Hawaiian guitar players. For example, Rudi Wairata, Coy Pereira and the already in and after the war known Victor Spangenberg and Theo Ehrlicher. But the De Fretes family stood out, the whole family was very musical and highly ‘Hawaiian-minded’.
The brothers Anton, Arie, John and Peter… They could all play. Of the youngest, Peter de Fretes, we could enjoy till recently. He competed with his ‘big brother’ but he excelled in a time in which recording companies were not so interested anymore. Strangely enough; the re-releases of all that old material are still selling well. Basically, these boys have ‘written history’. 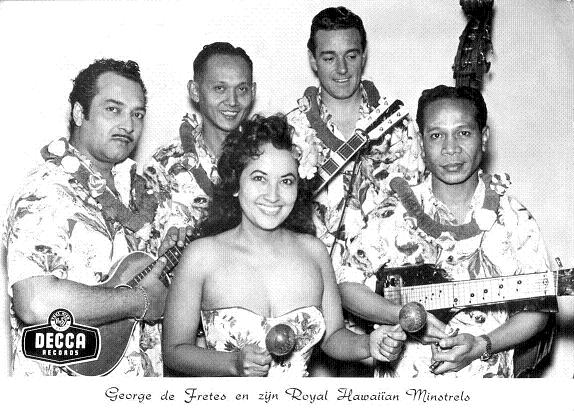 In the war (with Japan) the name of the ‘Royal Hawaiian Quintet’ (later ‘Minstrels’) had to be changed into ‘Suara Istana’ (Voices of the Palace) and the repertoire also needed to change. Not really a problem for the virtuoso Indian musicians, it just became ‘kroncong’. Because of his Dutch inclination, George de Fretes, actually the whole family, needed to emigrate to the Netherlands. Illegal, but George already had a contract in his pocket before he came to the Netherlands. After a short period of internment, The Royal Hawaiian Minstrels were founded with a ‘branch’ by the name Suara Istana. This happened mainly with those with who George already worked in Indonesia. Among others with his ex-wife Joyce Aubrey who already created furore as singer at the Mena Moeria Minstrels and Amboina Serenaders earlier in the Netherlands. Also daughter Wanda was put into action, although her mother forbad that. ‘I will break her legs’, she must have said once. But, it runs through her blood and Wanda even became an idol for young people for a short while.
Even though the introduction in the Netherlands (1958) of the phenomenon George de Fretes and his Royal Hawaiian Minstrels was breathtaking and very successful, after a few years the musical landscape was changed so much that they could not live solely from the music anymore. First for a short while (1964) but later (1968), George de Fretes had to take the decision to go to America where this kind of music still had a large number of supporters. Rather lonely, George de Fretes died on 19 November 1981 in California. His last wish was fulfilled: he was buried next to his great idol and model, the Hawaiian who made the Hawaiian music very popular in the world, Sol Hoopi’i.
We still have a large collection of recording material on record, so we can broadcast a few things in two programmes.
On the first photo, The Royal Hawaiian Minstrels in their days of glory. On the second photo, the three brothers John, George and Peter de Fretes with George’s daugher Wanda. On the background the ‘grand masters’ Sol Hoopi’i and Andy Iona.

Next month, the subject is Suara Istana led by George de Fretes.