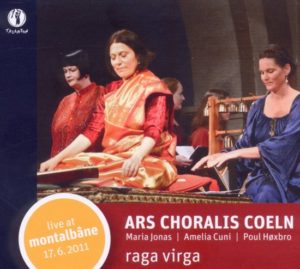 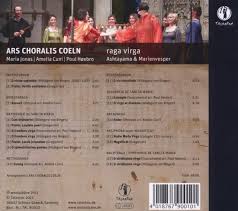 Indian ‘Dhrupad’ songs, performed by the ensemble Ars Choralis Coeln meet the hymn of Hildegard von Bingen (Hildegard was a theologian, medical doctor, prophet, poet and composer). No other woman in the Middle Ages has been as influential and versatile as Hildegard von Bingen (1098-1179), abbess of a monastery near Bingen on the Rhine in Germany. This ‘Live’ performance took place in 2011 at the German Montalbàne Festival.
The Ars Choralis Coeln is a choir of female voices directed by Maria Jonas, combining individually timed voices in the pursuit of an authentic style. The performance was a successful experiment in a concert that connected the Eastern and Western worlds. Both worlds stem from the context of contemplation in monasteries and temples.
Cd. Raga Virga – Ars Choralis Coeln – Live at Montalbàne Festival 2011.
Label: Talanton (2012), code: TAL90010.