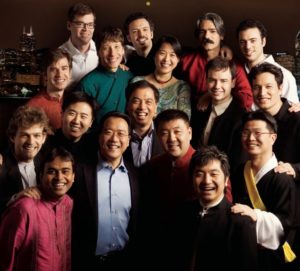 Yo-Yo Ma received his first cello lessons from his musical (Chinese) parents at the age of four. He first appeared to the general public at the age of five. When he is seven, the family has emigrated to America, he plays for John F. Kennedy. In recent decades, Yo-Yo Ma has become one of the greatest and most versatile musicians of the moment. In 1998 he started his “Project Silk Road”. As part of this project, he performed several newly written works with the Silk Road Ensemble, which was specially set up for the project. The ensemble is formed by musicians, composers and arrangers from the countries on the Silk Road. The Silk Road Ensemble uses various instruments such as: a Chinese lute, an Armenian duduk, a Japanese bamboo flute and a Mongolian violin.
Cd. Sing me home – The Silk Road Ensemble, Yo-Yo Ma.  Label: Masterworks (2016), code: 88875181012 | VIDEO