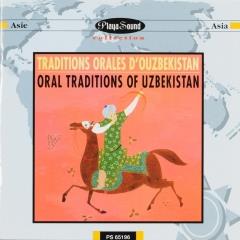 1-Traditions orales d’Ouzbekistan.
Uzbekistan is one of the small Russian republics of southern Iran, Afghanistan, Pakistan, and other republics such as Turkmenistan, Tajikistan, Kyrgyzstan, and Kazakhstan. The source of Uzbekistan’s musical tradition is Arabic. The main type of oral tradition is the maqâm, an ancient court music. Maqâm can be found almost everywhere in Central Asia. In the case of the Uzbek maqâm, they are composed of poems by a 15th-century poet, Nawai’î, and are generally songs of love and sorrow. We only hear fragments, because a maqâm can get lost for hours. An unusual music for the Western ears, but a treat for those looking for music from distant countries.
Cd. Traditions orales d’Ouzbekistan.
Tracks: 1, 2, 3, 4.
Label: Playa Sound (Frankrijk) 1998, code: PS 65196.

2- Ouzbekistan: les grandes voix du passé 1940-1965.
This album of Uzbek-Tajik music brings together archival documents (of average technical quality) despite their age.
The best singers of this era find a place there. The most notable document is the first track on this album, that of the brothers Akmal-Khan and Baba-Khan Sobhanov, Sufi keepers of Turkestan’s Yasavi tradition. Some of their religious hymns were officially recorded by the Uzbek National Radio in the 1960s.
Cd. Ouzbekistan: les grandes voix du passé 1940-1965.
Tracks: 1, 2, 3, 4.
Label: Ocora (Frankrijk) 1999, code: C 560142.