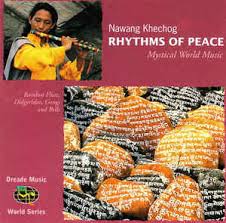 Nawang Khechog.
The album Rhythms of Peace uses soothing melodic textures to explore the inner silence that is the essence of peace. A suggestive meditation that suggests the vast spaces and sacred serenity of Nawang Khechog’s beloved Himalayas. With bamboo flute, didgeridoo, gongs, bells and drums. After leaving Tibet, Nawang Khechog traveled to India, where he spent 11 years as a monk studying meditation and Buddhist philosophy, including four years as a hermit. He is best known for his Grammy®-nominated collaborations with Philip Glass and Paul Simon, among others, and has served as an advisor for the film Seven Years in Tibet.
Cd. Rhythms of Peace – Nawang Khechog.
Label: Oreade (1996), code: ORW 52982.