Music from India by the Ensemble Badila: Qalandar Express. Love songs by the mystic riders. 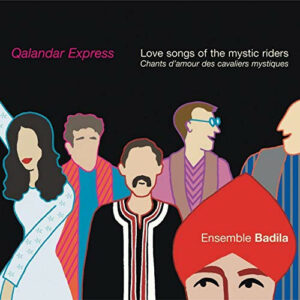 Named after the train that takes pilgrims to the shrine of the Sufi saint Qalandar, is an album of encounters: between western and eastern musicians, between the Arab-Persian world and India, between Hinduism and Sufi Islam. This “holy train” wants to pay tribute to celebration, joy and love, communion with the divine and takes us on a cloud of peaceful bliss, guided by the voices of Mame Khan Manghaniyar and Sohrab Pournazeri as well as by the old, tablas, karthals or other kamantchés.
CD. Qalandar Express – Ensemble Badila.
LABEL: Arion (2006), code: ARN 64692. VIDEO