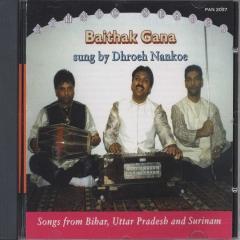 He lives in the Netherlands and has received music lessons from the best teachers in India for over 25 years via the ancient oral traditions.

In 1994 Dhroeh Nankoe was the first student in Europe to graduate in Indian singing and Indian music at the Conservatory of Rotterdam.

Many music admirers enjoyed his performances: at festivals in India; at the Tropical Institute in Amsterdam; at the Cannes Film Festival; at the Love Parade in Berlin; at Pinkpop with the well-known Dutch pop band Bløf; in the Royal Theater Carré and in the Concertgebouw in Amsterdam.
CD. Baithak Gana : Songs from Bihar, Uttar Pradesh and Surinam – Dhroeh Nankoe.
LABEL: PAN (2003), code: PAN 2037. VIDEO