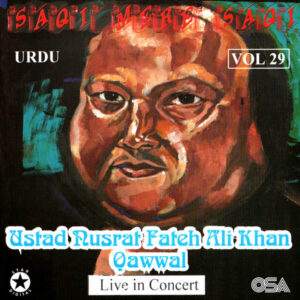 Nusrat Fateh Ali Khan.
A Qawwali singer from Pakistan. He was a son of Ustad Fateh Ali Khan, who taught him the principles of Qawwali. His first public appearance was at his father’s funeral. Nusrat was 16 years old at the time. A year later he formed the group Nusrat Fateh Ali Khan with, among others, his uncle. When his uncle died in 1971, Nusrat became the sole leader of the family group. He soon became famous in Pakistan. He had a hit with the song Haq Ali Ali. International fame only came in the 1990s, after an album of his was produced by Canadian guitarist Michael Brook. Nusrat Fateh Ali Khan collaborated with producers on soundtrack of films such as: Dead Man Walking and The Last Temptation of Christ. The collaboration with his friend Peter Gabriel brought further recognition. Nusrat Fateh Ali Khan died in London in 1997 at the age of 48.
CD. Qawwal: Live in concert; vol.29 – Nusrat Fateh Ali Khan.
LABEL: Oriental Star (1993), code: CD SR 073. VIDEO