* Meral Polat Trio, a journey from Anatolian folk music to protest mountain blues; Kurdish soul music, from east to west and back.
* Olcay Bayir, including Turkish folk music from Anatolia, as she got to know it from her father, an ‘aşik’ (a traveling bard). 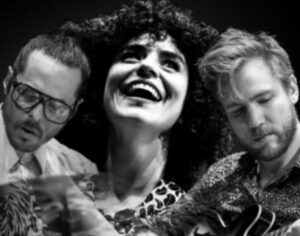 Meral Polat Trio.
Interprets the bittersweet pain and vitality of the 21st century diaspora with raw blues and Kurdish soul. Under the sublime accompaniment of guitar, keys and drums, the Meral Polat Trio takes the audience on a meandering journey through contemporary Anatolian folk and mountain songs and the many faces of the blues. Earthy, desolate and soul-cutting. Driven by Meral’s own words and the poetic legacy of her father, Ali Ihsan Polat, the trio embarks on a cathartic quest. Ez Ki Me. (Who am I?) tells old universal stories and gives them a new meaning and a modern context. Meral Polat: vocals & percussion. Chris Doyle: guitar & keyboards. Frank Rosaly: drums.
Cd. Ez kî me – Meral Polat Trio. VIDEO 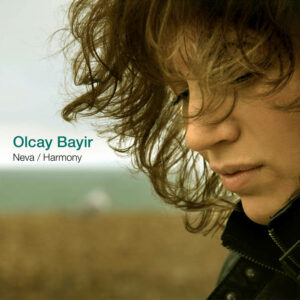 Olcay Bayir.
When the singer Olcay Bayir moved to London, she had little trouble communicating with musicians from another culture. She gathered a group of artists from different backgrounds. The origin of the songs is at least as diverse as that of the band members. The album opens with an Albanian love song, later Olcay Bayir sings a Sephardic Jewish lullaby and an Armenian song. Of course she also draws on the Turkish folk music of Anatolia, as she got to know it from her father, an ‘aşik’ (a traveling bard).
Cd. Neva / Harmony van Olcay Bayir. Label: World Music Network (2014), code: TUGCD1088. VIDEO