Radio Around the Globe | Concertzender.nl :: Radio

Radio Around the Globe

Music in the books of Literary Travel Bookstore Evenaar in Amsterdam. 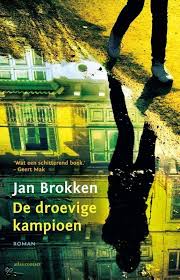 This is the story of Curaçao resident Rikki (Ricardo) Marchena, who goes on living with his gorgeous mother after his father commits suicide.
He plays tennis and later on table tennis after some trouble with his achilles heel, and is a champion for years. He is also a successful businessman in sporting equipment, but ends up in jail and in the gutter. The story is told through the eyes of Rikki, but also through the eyes of his brothers, little sister, uncle and for example his coach. That is what sucked me into the story. Curaçao, exceeding heat, corruption, drugs, and the atmosphere of Curaçao and the Antilles are described beautifully. A goal? Ah, no. On the Antilles we live like the sun shines, the wind always blows and the sea always rushes.
If we would finally wonder why we were alive, we would become desperate. And that is what missing. A little bit of despair.
Those with imagination pave their own way to hell. Idiots would never try to run away, because they simply except the truth for what it is. Rikki, our main character, had a very philosohical mind. His two older brothers could play table tennis quite well, but little Rikki beat them. He is at the top of this game for years. He is convinced his play came from anger. In this book ‘De droevige Kampioen’ by Jan Brokken, we read our way to Rikki’s inevitable doom: drugged up in an shabby building.
He realised: If I don’t smoke, I don’t know if I exsist.
But his mind keeps turning. In jail, after he burns down his sporting equipment company, he starts to read, especially Nietzsche.
One of his Curaçaoan tennis buddies, which whom he played table tennis tournaments, notices: if you grow up on a small island, it’s a sensation to travel 600 km across land without ever hitting the ocean. You finally realise how big the world is.
The music. Rikki knew 2 songs by Ray Barretto, one by a jazz musician who came from Puerto Rico, and a guitar solo by Jimi Hendrix. Rikki’s father loved to stomp along with the rumbas and chachachas  Radio Havana would broadcast.
In jail, he read, among other things, ‘Also sprach Zarathustra’ by Friedrich Nietzsche.
Ater being imprisoned for 2 years, he finds in a big empty house, a record of ‘Also sprach Zarathustra’ by Richard Strauss. Strauss based his music on the book by Nietzsche.
Both the book and the music heavily impressed Rikki.
In ‘De Droevige Kampioen’ we find many quotes by Nietzsche.
‘Also sprach Zarathustra’ by Strauss spoke to a lot of people and was used in movies like  ‘2001 A space Odyssee’ from 1968, a Stanley Kubrick film.
Rikki Marchena becomes enthralled by Nietzsche and the music of Strauss.
What is it like to be a champion?
To admire from a distance is wonderful, but the closer you get, the more it terrifies you. is op een afstand mooi, hoe dichter het bij je komt hoe benauwder het wordt. The only reason I play well is because I hate to lose and he wonders: doesn’t sport enlarge your ego to sickly proportions?
With Nietzsche he discoverd what he already knew: nothing is truly lost.
It wasn’t until I started to impress, I felt I exsisted. Don’t mourn the loss to long, only the worst control freaks get to the top. And there are many more valuable noter and texts in this book. Impressive and enthralling.
There but one thing to it: read that book.
Jan Brokken wrote it nearly 20 years ago and still took me away.
Te vinden bij Literaire Reisboekhandel Evenaar in Amsterdam, maar natuurlijk ook in iedere andere goede boekhandel.
Jan Brokken, who exactly 25 years ago, so in 1991, opened the store.
Stop on by and pick up whatever you’d like.
For more info www.evenaar.net
Sound engineer: Bart van der Horst
Compilation and host: Agnes van der Veld.
The latest news about the store

On 8 November, the judge will give a temporary verdict on our struggle with the landlords…

As you probably know, our landlord is trying to kick us on on 1 January 2017. We obviously don’t agree with that and we have been sued. The hearing was on 26 September, where the judge questioned both partieslisten sharply. We were strong and on 8 November, a temporary verdict will be given.

That we celebrate our 25th anniversary this year, doens’t add any weigth to the issue. On the contrary, it seems to be an argument for throwing us out. At least, that’s what the landlord’s attorney seems to think!

We will not be crushed! We live on!

On 29 September 1991, Jan Brokken opened our book store. We have decided to celebrate this anniersary in the spring of 2017.