The bumpy relationship between Beethoven and Haydn 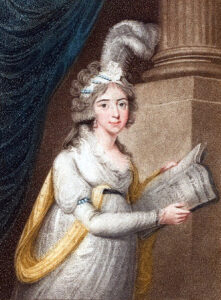 London, 1795. Haydn is celebrated at the premiere of his ‘Drumroll’ Symphony. At that very same concert, the improbably popular Italian diva Brigida Banti was also to sing, but she has fallen ill. Two months later she is well again and sings a dramatic concert aria that Haydn wrote especially for her. Many consider it to be his best aria. Beethoven agreed and composed something similar a year later.