Gianmaria Testa.
Da questa parte del mare is a turning point in the production of Gianmaria Testa. It’s a concept album, wholly focused on a single topic: the massive modern migrations in recent years. Gianmaria reflects on the reason why so many people leave their own country, looking for a better life. He explores the feelings of uprooting and dismay of emigrants, linked to the decision to move away from the country where they lived. CD: Da questa parte del mare by Gianmaria Testa. Label: Chant du Monde (2006), code : 274 1442. Video 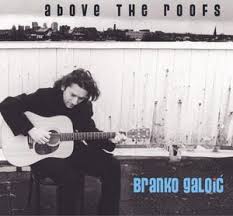 Branko Galoic is a guitarist, composer and singer-songwriter from Croatia. Since 2000, he’s been living in Amsterdam and that is where he recorded his first solo album Above the Roofs. The album is strongly influenced by traditional Balkan music, mixed with gypsy, blues and pop, and is sung in Branko’s mother tongue. The album Above the Roofs was rated among the 100 best albums of 2006 in the Netherlands by critic Rita Jager in the music magazine ‘Jazzism’. CD: Above the Roofs by Branko Galioć. Label: Snail Records (2005), code: lc 12490. Video

Victor Démé
Born in Burkina Faso, Victor Déme is an ascendant of the ‘Mandingo’ griots… He recorded Djon Maya, his debut album, in 2008 when he was 46 years old, with the French label Chapa Blues Records. It’s a modest, timeless folkblues album, played in a soft Afro-Cuban style that reveals Victor Démé’s affecting voice. On 21 September 2015, disaster struck: on that day Victor Démé was felled by a malaria attack. He died on the way to the hospital. CD: Djon Maya by Victor Démé. Label: Chapa Blues Records (2008). Video