Cherifa.
‘Berber Blues’ is pure poetry, connected with daily life and moments of joy or misery. The poems are orally passed on and recorded. The singer starts in the ‘Berber Blues’ and the choir joins in. They are accompanied by the rhythm of the Alloun, a round drum covered with goat leather; two similar drums are required for the right effect.
CD: Cherifa, Berber Blues.
Label: Wagram (2000), code: WAG 331. 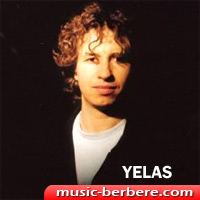 Yelas only writes his music on guitar, like a true bluesman. He studied one year at the conservatory in Algeria. He played at the underground, on the streets and in cafes and enjoyed the public’s attention. Today his place is onstage, where he performs a broad repertory with seven musicians. A “polyglot” who speaks four languages.
CD: ‘Ifili’ van Yelas.
Label: Iris Music (2002), code: 3001 858. 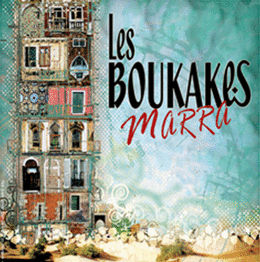 Since the formation in 1998, the band Les Boukakes has shared their adventure with around 20 musicians and singers from the Mediterranean. This is a perfect combination of eastern and western influences, rai, rock, funk and pop. CD: ‘Marra’ van Les Boukakes.
Label: Atlas Music Pro (2008), code: AMP 08-1.