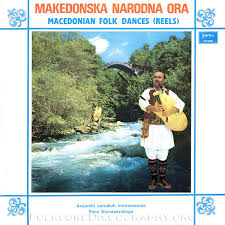 In this hour, folk dances from Macedonia, a country which is internationally refered to as FYROM that stands for ‘Former Yugoslav Republic of Macedonia’ since their independence.
We broadcast music from two LPs which were released for the Jugoton label. These records are from the years 1979 and 1972.
You hear the ensemble of the famous bag pipe player Pece Atanasovski.