With music by Papa Noël (Congo) and Bonga (Angola). 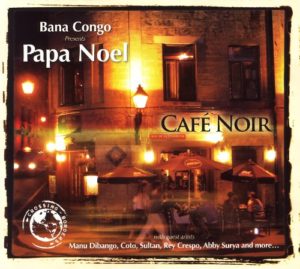 ‘Café Noir’ – Papa Noël.
Papa Noël (1940) is one of the most important musicians in the Congolese rumba. He learned the business as a guitarist in OK Jazz, the band of the legendary Franco. The Congolese rumba is inspired by Cuban music, which in turn was developed by African slaves from Congo. Papa Noël’s backing band consists of Cubans and a Nigerian drummer. One of the songs is called Salsa Africaine and that is a very adequate description for this album. In addition to his Latin accompaniment band, a number of interesting international guests also play at “Café Noir”. The well-known saxophonist Manu Dibango also plays along on two songs.
CD. ‘Café Noir’ – Papa Noël. Label: Tumi Music (2007), code: Tumi-141. Distributie: XANGO music. VIDEO 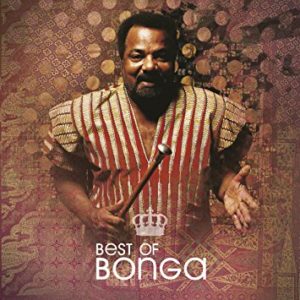 ‘Best of Bonga’.
Angolan singer and composer José Adelino Barceló de Carvalho, better known as Bonga, made his debut exactly forty years ago with the album “Angola 72”. At the time, he lived in Rotterdam as a strong advocate of Angolan independence. Bonga has since enjoyed considerable international popularity. That is not surprising, because it is hard not to fall for a block for his soft voice and sultry mix of influences from Angola, Portugal and Brazil. “Best of Bonga” collects eighteen songs from his long career. His melancholic voice takes us effortlessly to Portugal’s former colonies.
CD. ‘Best of Bonga’. Label: Lusafrica (2009), code: 562352. VIDEO