Tonight you can listen to the Monumentum project of Dutch composer and sonic artist Roland Emile Kuit. Monumentum is a fourty piece suite in memory of all victims who have died as a result of epidemics worldwide. To complete the five hour night Roland Emile Kuit made Loudspeakers, a special hommage to Dick Raaijmakers.

Overwhelmed by all news Roland Kuit felt he had to do something for the all-time-victims of pandemics. He created this sonic memorial to reflect on this horrific situation. This COVID-19 pandemic hovering as a noise through all societies and makes us more aware of who we are and the importance of art. Micro-movements of air as sonic genomes like a virus can exist in only the symbolic dimension of evolution until it finds a host. Like we can be hosts. 40 quadraphonic works of sound art resonating with our collective history. Therefore, MONUMENTUM is a timely reminder that death is a part of humanity that we can not escape and must embrace into sound. A sonic reconciliation of our commitment to society.
The starting point was to use the Kyma system to create the sound of 40 of the largest epidemics in history. Roland Emile Kuit developed new models for every pandemic forming viral networks as sonic genomes. The Kyma system generates these newest forms of non-standard synthesis techniques.

The radio premiere was at the Fondazione Accademia Musicale Chingiana on RADIOARTE ITALIA during the VI Chigiana International Festival & Summer Academy Siena Italia. Broadcasted in full across 36 countries simultaneously on September 1/2/3 2020 in Beyond the Silence. 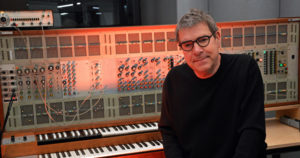 As Dick Raaijmakers’ Five Canons (1964–66) deals with fundamental aspects of spatiality of sound, we could play with the factor time and accumulate all five of them in one layer, narrowing down the spatiality of TIME.
Instantly the file is ready to be forced into new time dimensions. For this, Roland build a time-machine in KYMA, a super computer for sound. Hyper fragments of audio is carefully placed in a spatial realm, all to the boundaries of the perception of sound.
This deregulation is almost tangible in the way the singing voice is recomposed by disturbance.
During the pandemic lockdowns, we learned to listen in new ways to a silenced world.
Transformation of the speaker boxes at home to autonomous sound sculptures.