Vladimir Poljakov opens with
the fourth piano sonata by Boris  Tishchenko (in the photo), a loyal student and friend of Dmitri Shostakovich who wrote the cheerful String quartet no. 14 in two months’ time in spite of increasingly depressing and hopeless illness in Repino at the beginning of 1973. He dedicated this quartet to cellist Sergei Shirinsky from The Beethoven Quartet, after he already dedicated the twelfth to Dmitri Tsyganov. Large parts symbolically illustrate the absence of the second violin because of the death of Vasily Shirinsky, who held this position since the formation. The thirteenth quartet, dedicated to viola player Vadim Borisovsky, contains such a strong part and openings solo for that instrument. The second part of the fourteenth quartet contains an extensive duo for the first violin and cello, the last instruments from the Beethoven Quartet with the original composition from the ensemble. You will hear the Beethoven Quartet in an adapted composition.
Just returned from the United States the composer went to his dacha in Zjoekova to go deeply into the poems of Marina Tsvetaeva, which resulted in Six romances on texts by Marina Tsvetaeva. In 1972 student Boris Chaikovsky completed seven songs Lyric on a text by Alexander Pushkin for soprano and piano. Listen to singer Olga Filonova and pianist Olga Solovjeva. 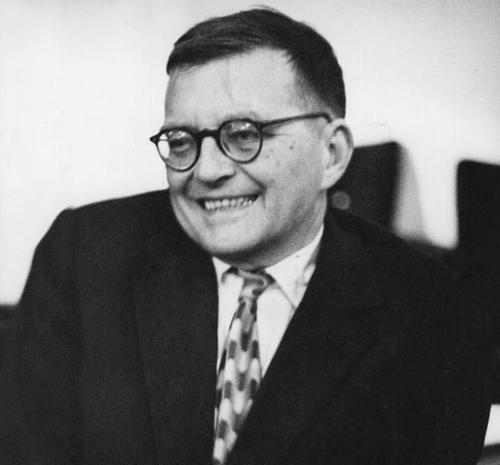 Early 1971 Dmitri Shostakovich wrote to student-colleague Boris Tishchenco that he would like to write a cheerful symphony. In between hospitalizations and treatment he actually began sketching and after completion he explained: ‘I have worked a lot on it. I wrote on it when I was in hospital and even later, in the dacha they gave me no peace. I got caught up in it and it is one of the few works that is very clear to me, from beginning until the end. I only had to make notes.’ He later wrote to Krzysztof Meyer: ‘I completed another symphony last summer. I think I should not compose anymore. But how can I live? I use very precise quotations by Rossini, Wagner and Beethoven and you can also hear Mahler’s influence.’ Shortly after this letter he had suffered a second heart attack. The premiere had to be postponed due to heart conditions from conductor Kirill Kondrashin. His sun Maksim eventually accepted this part. Today you will hear the Leningrad Philharmonic Orchestra conducted by Yevgeny Mravinsky with the Fifteenth Symphony by Dmitri Shostakovich.