Delusion of the Fury by Harry Partch. Microtonality on home-made instruments

Today in Unheard, most of our attention is focused on a new CD containing the last theatre piece by American composer Harry Partch (1901-1974), entitled ‘Delusion of the Fury’ (1965/66).

Partch created his own musical universe from the 1930s onwards, in which microtonality played an important role. To make his compositions sound right, he also designed and created special instruments. 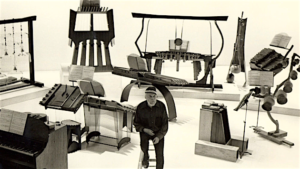 ‘Delusion of the Fury’ consists of two acts. The first is based on a Japanese Noh drama, and the second on an Ethiopian folk tale.

In addition, in this episode you will hear some short works by a composer who became and has remained mainly known as a conductor: Italian Giuseppe Sinopoli.