Today with the Frisian band Di Gojim and their album Moscow – Odessa. 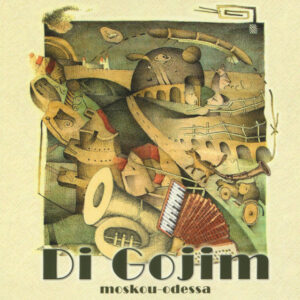 The literal meaning of the Hebrew expression “di goyim” is “the Gentiles.” An excellent name for a group of six young Frisian men who were not Jewish but were fond of Klezmer. Di Gojim was founded in 1988 and was one of the first Dutch bands to delve into the long history of Klezmer.
They bring, among others, Vladimir Vysotsky’s (d. 1980) immortal heroes back to life, translated into Frisian, Yiddish, French and Dutch.
The writer Harry Mulisch was a fan of Di Gojim: when he passed away in 2010, the Dutch Klezmer band was given the honor of playing at his funeral; while making music while walking, the coffin was escorted to the cemetery in Amsterdam.
CD. Moskou-Odessa – Di Gojim. Label: Icub4t (2011), code: CUP8047 – VIDEO