This episode is centered around recent releases with Indian music, varying from classic raga to Bollywood song.

To start off, Dutch cello player Saskia Rao de Haas. She has lived in Delhi for 15 years and is well known in the world of raga music in India. We play a selection of raga Bhimpalasi from her album The Indian Cello.
Followed by three tracks from the album The Shrutibox by YouTube sensation Shankar Tucker. He is an American clarinet player who makes popular music with influences from raga, pop, jazz and Bollywood music. He arranges popular songs from Bollywood films for famous Indian singers, or composes his own work. 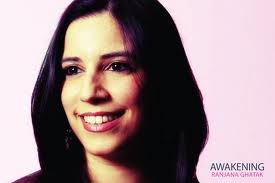 Following Shankar Tucker, it is singer Ranjana Ghatka’s turn, from London. On her debut album Awakening, she combines elements from North Indian raga music with jazz and contemporary pop. After that, North Indian raga music by famous raga violin player Kala Ramnath, from her Aavartan album. Kala Ramnath is also known as ‘the singing violin’, because she manages to imitate the human singing voice so well in her violin performances.