We play songs from the latest CD Traces of You by Anoushka Shankar. All of them, save one, were made by her, others were written with Nitin Sawhney, who is also the album’s producer. The voice of her half sister Norah Jones can be heard during the song Traces of You.

Cigdem Aslan sings historical songs, like they used to be sung in pubs, wine bars, prisons etc. in Piraeus, Thessaloniki, Istanboel and other ports.
The style is Rebetiko, of which the origin is not only Greek and Turkish, but also Armenian, Jewish and Levantine among others. 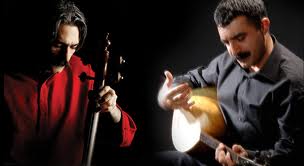 This time, Iranian kamancheh player Kayhan Kalhor performs together with Anatolian baglama player Erdal Erzincan. The improvisations on the CD Kula Kulluk are intense and fascinating – recorded live in Bursa, south of Istanbul – and encompass music from all parts of Turkey, but also from traditional Persian origin.