Jon, an inspired composer who did not shy away from experimentation. Many of his works have been premiered at the annual festival of the Groupe de Musique Experimentale de Bourges (France) and at Fylkingen in Stockholm, Sweden. A new trend of “programmatic electronic music” emerged. Music that is based on a narrative.

In the late 1970s, Jon was closely involved in the development of the Synclavier (designed by Thayer professor Sydney Alsonso and Cameron Jones). This is a computer music system with an integrated synthesizer, sampler and hard disk recorder. Composers who used this system included Joel Chadabe, Frank Zappa, Laurie Anderson, Trevor Horn and Robert Henke. This system was a flagship of the music industry productions, allowing e.g. sampling techniques which became very popular with the general public.

In the field of technique & composition, he taught and wrote numerous articles and books. Under his direction, the Elektronmusikstudion (EMS) in Stockholm, flourished again in music education and music production. 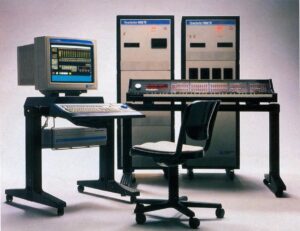 Jon Howard Appleton (born January 4, 1939) is an American composer and teacher who was a pioneer in electro-acoustic music. His earliest compositions in the medium, e.g. Chef d’Oeuvre and Newark Airport Rock attracted attention because they established a new tradition some have called programmatic electronic music. In 1970 he won Guggenheim, Fulbright and American-Scandinavian Foundation fellowships.

When he was twenty-eight years old he joined the faculty of Dartmouth College where he established one of the first electronic music studios in the United States. He remained there intermittently for forty-two years. In the mid-1970s he left Dartmouth to briefly become the head of Stiftelsen Elektronmusikstudion (EMS) in Stockholm, Sweden. In the late 1970s, together with Sydney Alonso and Cameron Jones he helped develop the first commercial digital synthesizer called the Synclavier. For a decade he toured around the United States and Europe performing the compositions he composed for this instrument. In the early 1990s he helped found the Theremin Center for Electronic Music at the Moscow Conservatory of Music where he continues to teach once a year. He has also taught at Keio University (Mita) in Tokyo, Japan, CCRMA at Stanford University and the University of California Santa Cruz. In his later years he has devoted most of his time to the composition of instrumental and choral music in a quasi-Romantic vein which has largely been performed only in France, Russia and Japan.
Jon Appleton | Composer