The Palace of Melancholy is a warm shelter and musical refuge for those who love forgotten beauty, curiosities, and lost sounds from the period 1925 to 1970. A talk with programme maker a.k.a Palace Guardian, Sjaak Roodenburg.

Sjaak, why the melancholy ?
It started with Connie. As a young child I saw lovely American cars with wings, white tyres, and a red steering wheel riding around . And KLM still flew with Connies: elegant Super-Constellations with three tails, a fuselage in the shape of a dolphin and a gorgeous dark brown engine noise. But the American cars disappeared from the street, Schiphol scrapped the ‘Connies’ and happy music on the radio was replaced by pounding on loud guitars. As a child I was already unhappy with disappearing beauty.

In addition I had a father and a number of uncles who could passionately tell stories about the past. The first feature film I saw – on a black and white television, with subtitles I could barely understand – was the western-musical ‘Calamity Jane’ with Doris Day and Howard Keel. The upbeat songs were very different from the anguish of much pop music. All of which awakened the melancholy over all the beauty being lost. A longing for the 50’s, from where the qualification “music from the chewing gum pictures” came.

And the name ‘The Palace of Melancholy’?
In the 90’s I made something similar on Sunday afternoons which was called “ Sunday afternoon sadness” and was about that Sunday afternoon feeling of emptiness. When the programme moved to Sunday evening it needed a new name, which was later appropriated by an establishment in Amsterdam.

The Palace starts with an upbeat and rather Sunny tune, is that deliberate?
The most recent months “All Aboard” by The Skymasters, before that “Roller Coaster” by Henri René – indeeed quite happy, but the melancholy is overladen wih a dose of irony. You can see that from the content: as well as unrestrained heaviness and former South American tango singers from whom you can hear the tears dripping from the voices, also unconcerned French ditties by the smooth radio orchestras you can imagine for yourself. Sometimes the Palace is a bit camp, as it used to be called. The melancholy comes basically because it’s about sounds from a world that has disappeared.

Do you have a group of faithful listeners?
In the past it was mostly the older generation and the content was mostly nostalgic. But that target group disappeared slowly, so I now focus more on youth, for whom the Palace can be a voyage of discovery. I find it remarkable that on radio there is plenty of room for classical music and pop musick, but barely for music from the start of jazz up to the Rolling Stones.

Names such as Bing Crosby, Duke Ellington, or songwriters such as Rodgers & Hart and the Gershwin brothers barely register – let alone an obscure genius like Mat Dennis. Johnny Mercer complained at the beginning of the 60’s that he wrote just as lovely songs as in the previous decades, but no-one wanted to sing them any more. It’s bizarre how amazing vocalists such as Sarah Vaughan, Mel Tormé, Peggy Lee and the gorgeous orchestras of Glen Gray and Les Brown, or Dutch performers such as Ronnie Potsdammer, Jan de Vries and Johnny & Jones are banned from the Hilversum airwaves? You wouldn’t say: “Send Vincent van Gogh to the basement and put out Ravel in the garbage because that’s old rubbish?” Beauty is for ever and not fashion dependant.

Lack of attention means you depend on luck. I came into jazz by accident. As schoolboy I was going to a Moody Blues night concert in Amsterdam . It was a tough bike ride, through wind and rain. When I got there it seemed I was a week early: no Moody Blues, but Benny Goodman, “the King of Swing”. Because it was still raining, I just bought a ticket and around the third number I felt the shivers going down my spine. After that I didn’t need the Moody Blues any more: I had discovered swing. 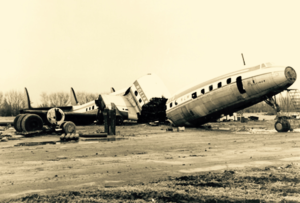 Are there artists you keep coming back to?
Of course there are the usual suspects – Sinatra, Ella Fitzgerald and Nat King Cole, but I also have a soft spot for more obscure types and curiosities. Such as Little Esther, who sounded at age 12 as though she already had had a rough life, which she confirmed when she became Esther Phillips . Or Yma Sumac, the Peruvian singing miracle with a four octave range. The crystal clear voice of Jo Stafford, whose alter ego Darlene Edwards concentrated on offkey singing of standards. Then tempo doeloe-music from early India , South American mariachi-melancholy, trumpeter Clifford Brown, the sorrowful Lee Wiley, on the surface amazingly beautiful but according to her ex-husband ‘the only witch who wasn’t burned’. Or Kay Starr, who sounded as though she’d just bathed in a bathtub full of gin. In general it’s going well with admirers of Musical Heaven.

What’s coming up in the Palace ?
On Saturday 1st December during the Week of Melancholy it’s going to be a really wet Palace, lots of rain and an occasional tear. In the last week of this year there’ll be a Palace of animal music – with among other things the amazing Singing Dogs of Don Charles. Thereafter Palaces are being made about Humour in Music, Lost Glories, Artistic whistlers and Yodellers.

How’s it working with technican Willem van Schip?
Willem is the Rolls-Royce of technicans, an enthusiastic, fun and inspiring man. That is very important on live radio, because if there’s a grumpy face on the other side of the glass it’s hard to conceal that in your voice. Willem is a Wim Sonneveld-expert, so I keep trying to surprise him with things he doesn’t know. And sometimes it works .