A second Episode dedicated to one of the greatest Egyptian composers and Ud players of the 20th century. Riad El Sunbati (or Al-Sunbati) (1906-1981). best known for his music for Umm Kulthum.. Sunbati is one of a handful of  composers responsible for the the sound of Egyptian music-an example and inspiration to all middle eastern music- between the 1930s and 1970s.

you can listen to the first episode by clicking here 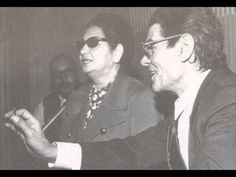 In this episode we’ll listen to a complete live recording (about 54 minutes)  to one of Sunbati’s compositions for Um Kulthum performed by her in January 1955, followed by the intro played by him on the Ud.