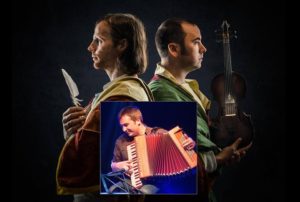 A year ago we brought your attention to the Irish singer and composer Lorcan Mac Mathuna. Good news: on Friday 21st December from 20.15 Mac Mathuna will be playing with Daire Bracken (violin) and Martin Tourish (accordeon) exclusively for Folk aan de Zaan, in concerthall De Kleine Waarheid in Zaandam. And even better, the Concertzender is giving away a free ticket!

Lorcan Mac Mathuna is an innovator who respects tradition. His singing is based on the sean-nos, a traditional, strongly ornamented style of singing with powerful melodies. But Mac Mathuna adds instruments in, both from the Folk tradition such as a clarinet and electronics.The result fits within the Irish folk genre, but the influence of classical music, rock, pop, jazz and even avant-garde are evident. Mac Mathuna goes the same way with his texts, drawing from ancient Gaelic poems, completed by his own materials.

Free to Lorcan Mac Mathuna? We’re giving a ticket away!
Send an email before 15/12 to the Concertzender quoting “Lorcan”.

To get in the mood the Concertzender is repeating the episode of Folkit! from 20th December 2017