Say ‘Louis Armstrong’ and most people will immediately think of a sweaty man with a huge grin and a dark brown voice singing repertoire such as Hello Dolly or What a Wonderful World. Armstrong, alias Satchmo, is one of the greatest American entertainers of the 20th century. Rightly so, but also a bit of a shame. Because his real greatness lies 50 years earlier than his best known successes. Cornetist Ruby Braff compared Armstrong’s importance for music with the Big Bang for the Universe. And Miles Davis said: ‘You can’t play anything on the trumpet that doesn’t come from him, even this modern shit. I don’t care how bad he sounded on the trumpet. Never.’

Trumpet Battles
On websites with musician jokes trumpeters don’t do very well. ‘How many trumpeters do you need to change a lightbulb?’ Answer: ‘One to screw it in and four to tell you how they would have done it better‘. Another: ‘How do trumpeters greet one another?’ Answer: ‘Hey, nice to see you. I’m better than you.’ That ‘I’m better dates back to the battle about high notes: high C and the thin air above it.

That began at the creation of jazz. New Orleans, around the turn of the century, a town of seamen, pimps and hookers. Cafes lured customers inside with jazz music. It was the empire of cornetist Buddy Bolden, of whom it was said that his lungs were so powerful you could hear him playing 14 miles away on a clear night. Bolden was the unrivalled King between 1900 en 1907 – the winner of trumpet battles which turned into a massacre was known before the start. Boldens career took a dramatic turn on his 30th when he was stricken by an alcoholic psychosis and landed in an institution. Then came Joe Oliver – ‘King Oliver’. 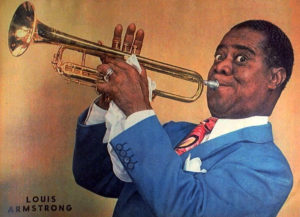 Armstrong!
And in his wake came Louis Armstrong – whose early years could easily have come from a Dickens Christmas Story. Born in 1901, his father left immediately, his 15 year old mother was an alcoholic and worked as a prostitute. When he was 11 he fired a gun on New Year’s Eve and was sent to a correctional institution, learned to play the cornet there and when he came out 4 years later he challenged all the other cornetists. King Oliver took him into his orchestra (‘As long as Louis plays with me in the band I’m the King’) – and the orchestra became ‘the hottest band ever to sit on a bandstand’. But Oliver got teeth problems and he began to play with such pain that tears appeared in his eyes. He finished life as a doorman.

Lip pain
Armstrong was the new hero. For others high C was the highest they could reach, for Armstrong with his powerful lips he could conclude his solos with a high F – several trumpeters who tried to play like Louis , ruined their lips and therefore their career. Others tried putting chewing gum in their mouths to get higher , but then they lost their lower notes.

Armstrong was famous as ‘the world’s greatest jazz cornetist’ and didn’t appreciate competitors. Just when he started, one evening Freddie Keppard came along. He listened briefly and then said: ‘Boy, give me your instrument .’ Keppard played flat out, confidently gave Armstrong his instrument back and left the podium to applause. Armstrong’s wife, pianist Lil Hardin, whispered to Louis: ‘Get him!’ And, as she later recalled: ‘I’ve never heard him play like that in my life! If you really want to hear Louis play you have get him riled up. Boy, he blew and blew. At the end the people were standing on their chairs and screaming with excitement. And Freddie Keppard disappeared quietly into the night. After that no-one asked to hold Louis’ trumpet again.

Jazz grammar
The surprise for 20’s listeners must have been enormous. Music lovers were used to nice waltzes, the operatic performances of Enrico Caruso or the vocal twittering of the black-faced white man Al Jolson. Suddenly you had the quicksilver trumpet playing of Louis Armstrong, which freely wandered around existing melodies, fluttered in the top registers and irresistibly summoned listeners into action.
During the 20’s Armstrong playfully developed jazz grammar. And not just that. His scatting recording of Heebie Jeebies immediately revolutionised singing; singers such as Bing Crosby, Frank Sinatra, Billie Holiday are all in his debt, just as later vocalists such as Ray Charles or Aretha Franklin .

The growling and moaning recording from February 1926 made scatting popular. According to anecdotes the scatting started when during a recording the score blew onto the floor and Louis, who didn’t know the lines, stated scatting ‘Eh, eef, gaff, mmff, dee-bo, deedle-la-bahm/ Rip-rip, de-do—de-do, de-do-de-do’ etc.
In the previous orchestras where he worked, Armstrong was not allowed to sing because of his raspy voice. Until people heard him perform Heebie Jeebies , whereupon Earl Hines made his classic remark that since then every musician in Chicago stuck their heads out of the window during the rain in the hope of catching cold and sounding like. After him came Bing Crosby, who translated Armstrong’s inventions for the mainstream white public.

HAPPY NEGRO
What upset many black colleagues was that Armstrong so obviously was ‘the happy negro’ – the friendly entertainer with the big smile and carefree songs – the man he actually was. On the big screen Armstrong was brillant in box office hits like High Society – an Uncle Tom for whom it was easy to overlook what a genius he was, how brilliant his solos were, how innovative his singing. According to his black critics he humbled himself in front of the white man – why should the great Louis Armstrong play yet another butler in a film – the stereotyped black roles which colleagues such as Duke Ellington turned down. 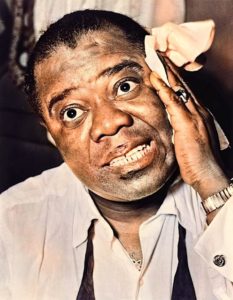 The criticism from his own circle became so strong that a young jazz performer from the 50’s refused to show his haystack white grin – more so, Miles Davis played with his back to the audience – totally against the coquettish vaudeville-tradition on which Armstrong drew.
Towards the end of his career Armstrong began to receive recognition from his colleagues. Even so after his death many observers were surprised to read that this famous entertainer had been one of the greatest musical innovators. His last performance was in March 1971 in the Waldorf Astoria Empire Room. He died on 6th July 1971 – in his sleep at 5 o’clock in the morning. The day after his death The Los Angeles Times published a cartoon showing Armstrong blowing archangel Gabriël off the stage.’